“Beyond the testimony of the Holy Ghost, the Witnesses represent the only evidence for the Book of Mormon provided by the Lord himself. Candidly examining all substantial arguments, pro and con, this project will argue powerfully for their credibility.”

For nearly 200 years, skeptics and critics have been trying to explain away what many Book of Mormon witnesses stated—that they had seen angels and hefted golden metal plates containing ancient inscriptions. To their dying days, these witnesses defended their testimonies even in the face of cruel mobs, the ridicule of society, and betrayal by friends.  Why?

This project, produced by the Interpreter Foundation, consists of three main segments.

Many know the story of the witnesses but few know why three men who, though intimately involved in the beginnings of the Church of Jesus Christ of Latter-day Saints, chose to leave it. Would they return? To reach a broader and younger audience, the dramatic film WITNESSES introduces viewers to the key Book of Mormon witnesses and their dramatic stories. View the feature trailer. Dramatic feature in theaters June 4, 2021. 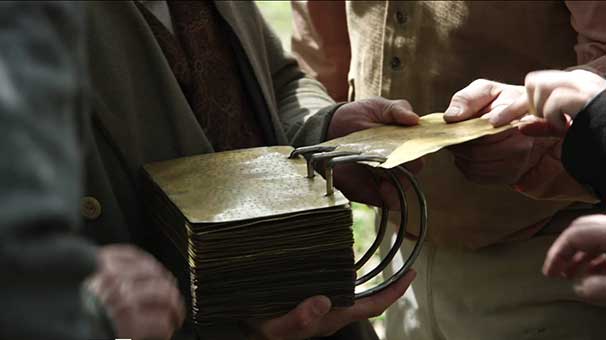 Were the eleven official witnesses of the Book of Mormon reliable? Were there unofficial witnesses? What did women experience? Were the plates actually gold? How could witnesses really hear the voice of God and yet still doubt His prophet? In a unique blend of dramatic reenactments and interviews with scholars, legal experts, and historians, two episodes will get families talking as we face the fact that none of the witnesses ever denied their claims, but boldly proclaimed their testimonies.

To share the depth of so many insightful interviews with those who desire to learn more, the team will ultimately produce SNIPPETS—many short “films” about 3.5 minutes long—and distribute them via The Interpreter Foundation website. To learn more about the witnesses visit witnessesofthebookofmormon.org

Produced by The Interpreter Foundation, a 501(c)(3) charity which accepts tax-deductible gifts to this docudrama.